The third large regional GloSYS research project examines the social circumstances of young researchers in Latin America and the Caribbean. The objective of this project is to investigate the socio-structural contexts that influence the trajectories of early career researchers and the capacity of these academics to shape their careers. In considering the careers of young academics as pivotal components of knowledge production and dissemination, the project will have significant policy implications for national, regional and international contexts. Six countries – Argentina, Brazil, Colombia, Cuba, Guatemala and Panama – were strategically selected as the study’s focal countries. 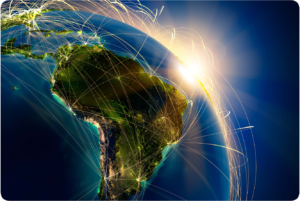 There has been a notable development of scientific activity in Latin America and the Caribbean in recent decades, inter alia in terms of enrolment ratios and scientific publications. Despite the great capacity for developing research in this region, it is hindered, in part, by barely explored obstacles that lay on the career paths of young researchers. What is more, prior research on career trajectories can be characterised as either highlighting individual or structural factors, while organisational structures, institutional dynamics or national influences tend to be misregarded. A growing awareness of this separation has led to a consensus: Research on early career researchers needs to capture the critical intersections between individual and structural factors that influence their careers and societal integration. We argue that investigating the interplay between structural factors and individual agency in Latin America and the Caribbean is crucial to understand the recent expansion of their higher education systems and development of research capacity.

As the GloSYS umbrella study is based on a comparative approach, the LAC study draws upon the preceding GloSYS ASEAN and Africa studies and therefore enriches the research outcome. The state of the art of the state of early career researchers in the LAC region was evaluated through a literature review as scoping study. The empirical study as such will be conducted through an innovative, mixed-method design. We propose a four-phase study that involves:

1.) qualitative interviews to explore the state of early career researchers and develop a quantitative questionnaire;

3.) qualitative interviews to explain why and how certain factors identified in the survey are significant; and

4.) integration of the evidence from the three earlier phases to consolidate an overall interpretation.